by tblakebraddy on January 25, 2016 in Articles, News • 0 Comments
I wrote a review for the indie horror game 'Oxenfree' this weekend, and because of some crossed wires between me and my editor, his version got published. Instead of letting it linger in purgatory forever, I decided to publish it here on my site.

I've finally reached the age where people of my generation are creating experiences reminiscent of my own childhood. Part of me always wanted to be the protagonist in a Steven Spielberg movie, especially one about aliens. (Though not Aliens, which I get was directed by James Cameron, but I digress.) The idea of bebopping around with my friends, trying to either hide or expose some massive secret about the universe, was something I gravitated toward. Plus, I wanted my own E.T. to wander around and have adventures with, and modern day adventure games have been able to mimic that prospect fairly well. Oxenfree for example, combines the exploration and dialogue of a more self-obsessed and self-aware Goonies with the premise of something like E.T. or Poltergeist. (Which is only rumored to have been directed in secret by Steven Spielberg.) There is something magical about the environment, the art style, and the way the characters interact that is unlike almost every game I've played. It is only tangentially related to the horror genre -- there are several creepy scenes -- but it's more science fiction than scary. It's a solid game with an above-average story and a beautiful art style. However, it's got some narrative issues that cripple what could have otherwise been a near-transcendent experience. 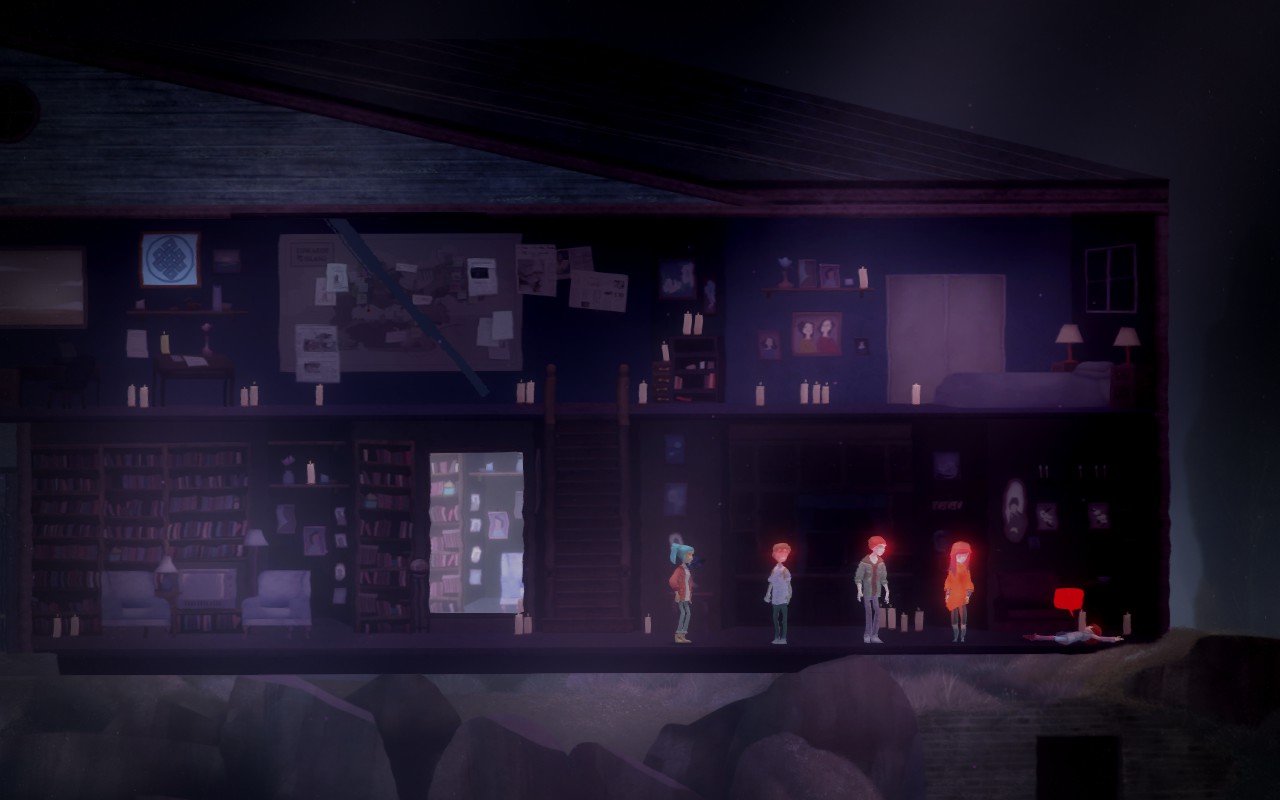 Night School Studios developed Oxenfree, an an adventure game that, to me, is like a mixture of several things: Gone Home, Kentucky Route Zero, and maybe a little of Costume Quest It is possessed of a truly unique art style, as I hope to convey throughout the review, and quirky characters who, in theory, jump off the screen. You play as Alex, a sort of sullen-but-rad teenager, who ventures to Edwards Island with the purpose of partying on the beach with her friends Clarissa, Nona, and Ren. She's also got her new stepsibling, Jonas, tagging along, and they've never really met before. While exploring the island proper, Alex and Jonas encounter a bizarre radio signal and tune into it. That's when things go a little (read: a lot) haywire. Certain dialogue events clearly point out that Edwards Island was the site of some "military stuff," to sidestep any cry of "spoilers!" and that leads the characters down a path toward some strange, otherworldly experiences. There are some puzzles throughout the game -- some collectibles, as well -- but the whole experience rides on the back of the visuals, the dialogue, and the exploration. You see, Alex had something extremely unfortunate happen to her the year before, which explains a lot about her current mindset. Ergo, her relationships with the other members of her crew are strained, and so part of the story's arc is connecting back with her friend group. There's also the slightly awkward inclusion of the stepbrother character, who provides a slight barrier to welcoming yourself back to the group. The character interactions are superb. The dialogue options feel natural, and what characters say relate mostly to what prompt appears onscreen, which doesn't always happen in games. (I'm looking at you, FallOut 4.) There is a healthy balance between plot-heavy exposition and character-building discussion. For me, all of the characters felt real enough, save for Nona, who seems to be a complete afterthought in the grand scheme of things. And in building up the secondary characters, I felt like Alex became an increasingly real protagonist. 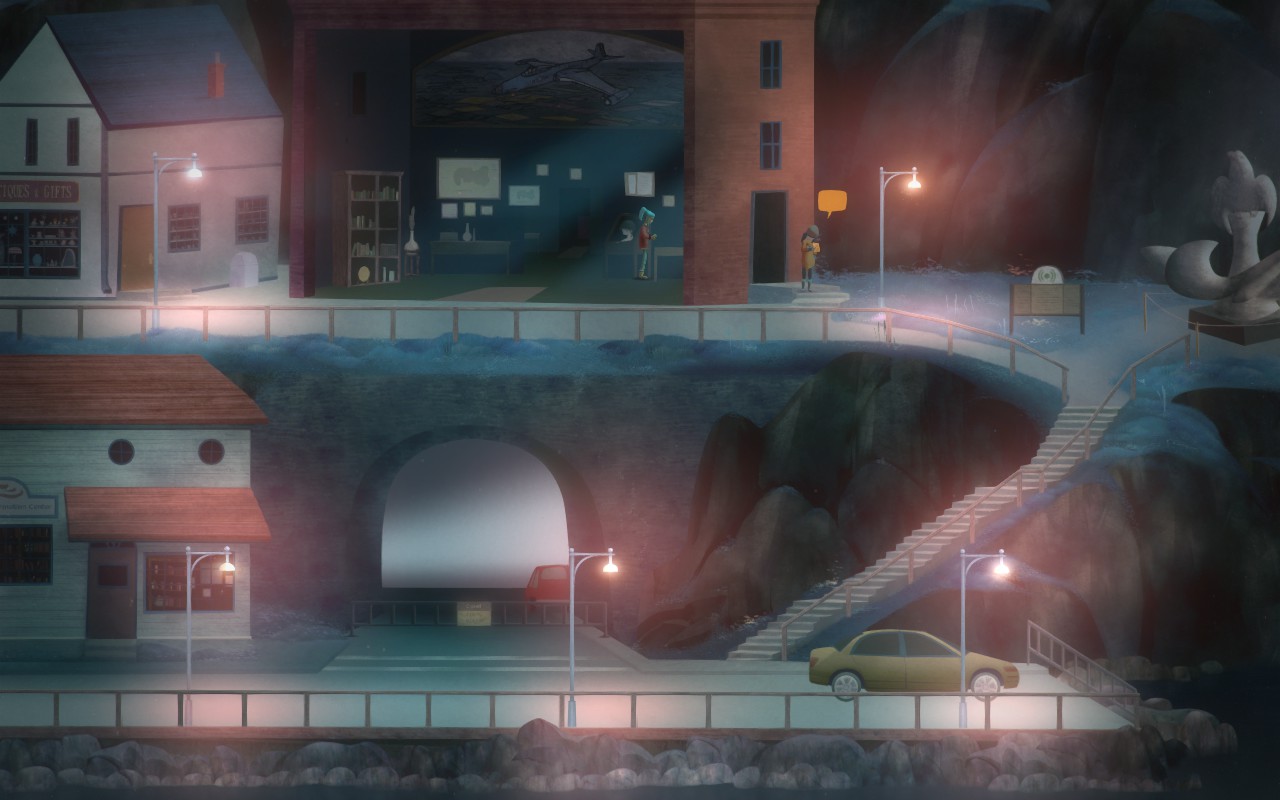 The game takes players throughout what is ostensibly an abandoned tourist trap. No one appears to be on the island anymore, and the players arrived via ferry, so they are trapped through the night. In that way, it's vaguely reminiscent of Until Dawn. The environments, like the rest of the game's designs, are simple but effective. Everything has a unique painterly quality, and I found myself screendshotting every few minutes as I played the game. I was quite struck by how distinctive the game looks, and the tone, which I also found to be quite idiosyncratic, stems from the way the game looks. I can't let this review go without mentioning the score, which is completely perfect. I'm usually wary of the upsale of "game+soundtrack" options on Steam, but this is one I think might honestly be worth it. SCNTFC, who I think did the soundtrack for last year's Galak-Z, intensifies the ethereal atmosphere the game attempts to convey, and the tracks themselves are totally listenable. I would go so far as to recommend players experience this game via headphones, because the trippy combination of soundtrack and sound design make Oxenfree's aural component really stand out. As you perambulate across the deserted landscape, you'll get into deep, very often contextual, conversations with your friends. There is a lot of movement in the game, because you're constantly moving from location to location, so it's nice to have the dialogue fill in the background for your characters' relationships, and you learn quite a lot about them as you travel to the towers and industrial buildings of this locale. It's the way the game makes you care about the characters. However, due to the game's length -- I played through it in about four hours -- something happens to the middle act. The part where the characters really bond, where they connect and combine their skills and abilities to become a more cohesive whole, is somehow missing. The game kind of jumps from "Hey, we're just trying to get to know one another again" to "OMG, we have to save one another because we were old friends." On the whole, I feel as though the other characters only work to benefit the story of Alex, and I'm okay with that. For me, the story of this game is her story, and I feel as though her story heads into some interesting territory and gets (mostly) resolved by the end. I felt pretty satisfied. 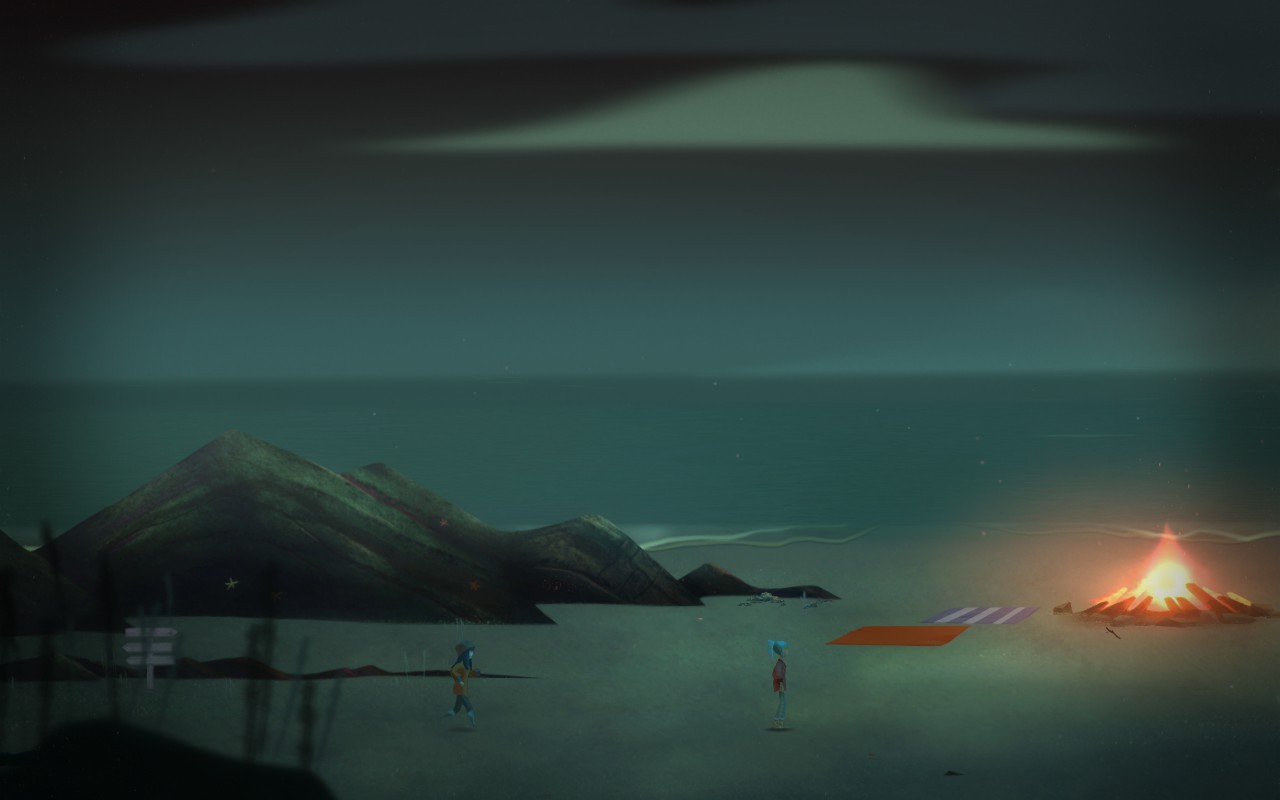 But that's really my only complaint about Oxenfree. The game looks great. It scales well. Very often, as you trek from area to area, the camera zooms back, revealing a well-realized world, one with a character all its own, and very few games of this scope are able to pull that off. It's something that helps push Oxenfree from being a twee little experience to a compelling visual experience. The optical effects, too, give the game an 80s video store quality that I found super intriguing. The puzzles get repetitive, but they, too, are pretty simple, and plus, the game is built on a very specific narrative concept, so I even felt as though I could give it a pass there. One of the elements I found surprisingly cool about Oxenfree is its restraint. It could be argued that the restraint results in a kind of flat arc for the ancillary characters, but it also doesn't try to cram a whole lot of unnecessary gameplay into the experience for the sake of bulking it up. I can respect that. It told an interesting story, mostly about the main character, but also about the location. Edwards Island felt like a real-ish place, even if the game didn't quite give the audience enough to latch onto, with regard to backstory. Oxenfree has the title of being my favorite adventure game of 2016 by default, but it will take some pretty strong contenders to wrench this interesting little experience from a future top ten list of some kind. Pick it up if you're into slightly off-center 80s science fiction with kid protagonists. You'll like it.