There was a lot wrong with my 2016, but productivity wasn’t one of them. I compiled a list of personal and professional accomplishments, and this past year was one of my most productive. (In a separate post, I’m going to discuss the power of making accomplishments lists for each year, but just take my word that it’s a necessary endeavor for everyone).

I didn’t include in my reflections any Best Of lists. They tend to be too navel-gazy for my taste, but I did A LOT of reading in 2016 and wanted to highlight my favorite books. Non-fiction definitely dominated my reading, in part because I rebranded the blog and the Principled Uncertainty Podcast to focus on more true crime stuff, but it’s also because I found a treasure trove of books about real life that were stranger than most fiction.

Stephen King is just the best. So long as he keeps writing 1-2 books per year, you can bet they’ll end up in my best of lists. He’s just my favorite, and I hope he lives to 120 and writes a novel per year in that time. Fingers crossed.

Southern Bastards is the best comics series you’re not hearing about unless you’re really hardcore. I could see Earl Tubb and Rolson McKane going on a rampage across the South in one hell of a crossover. If you haven’t read it, just know the series is kind of like if Quentin Tarantino had written Friday Night Lights.

3. You Will Know Me, by Megan Abbott

I picked up The Fever way back in January 2016 and loved it. I’ve talked at length about coming around to Abbott’s works, and it’s kind of a dream of mine to get her on the Principled Uncertainty Podcast for 2017. You Will Know Me follows the lives of a family heavily involved in teen gymnastics following the death of a friend, and it is un-put-down-able. Tell me you don’t like it, and I’ll buy your copy. (No, I won’t, but seriously, how can you not like it?)

I had the distinct pleasure to interview Renner about his quite personal reflections on and investigation into the Maura Murray disappearance. If you investigate one bizarre true crime case in 2017, let it be the Maura Murray disappearance. It’s one of the most fascinating stories you’ll ever discover, and Renner’s book covers all the interesting angles.

Columbine, like 9/11, was one of those formative experiences in my life, and so it holds a sway with me that, say, the Kennedy Assassination did with my mother. Cullen’s exploration of the Columbine Massacre and its long-term implications is a must-read for anyone who clung, agog, to their TV sets in the spring of 1999. Yet another nonfiction book, Lost Girls is as in-depth analysis of the as-yet unsolved Long Island Serial Killer case in New York. You won’t find another book as well-written or painstakingly researched as Kolker’s, and yet, despite the details it’s an approachable book. (Also, another plug: the LISK case was featured in season 1 of A&E’s The Killing Season, and I interviewed its creators for The Principled Uncertainty Podcast). 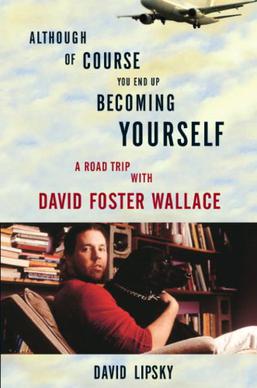 7. Although of Course You End Up Becoming Yourself: A Road Trip with David Foster Wallace, by David Lipsky

Though I don’t think I could ever write like him, I have an intellectual affinity for David Foster Wallace. He is a fascinating character in the history of American Literature. He’s kind of like a cult Kurt Cobain of the late 90s and early 00s, and his death at his own hands left millions shocked. If you’ve ever cared about DFW, Although of Course You End Up Becoming Yourself is an absolute must.

My reading year was filled with divine true crime works, and People Who Eat Darkness is right there are the top. It’s about as thorough a piece of journalism as can be imagined, and it covers a topic completely alien to me. It’s about a young American woman who goes missing in Japan, and it is as compelling as any fictional thriller I’ve read in the last ten years.

9. Tinseltown: Murder, Morphine, and Madness at the Dawn of Hollywood, by William J. Mann

William J. Mann’s Tinseltown combines two of my favorite topics into a single volume: murder and Hollywood. Tinseltown is what I imagine would happen if Erik Larson wrote a James Ellroy novel. It’s about an unsolved murder from 1922 Hollywood and the cast of characters who play into the subsequent investigation. It is absolutely divine.

Reader Magnets is one of the most clear-headed guides to publishing books on Kindle I’ve ever read (and I’ve read a lot of them). It’s not on par with reflections on the life of David Foster Wallace, but come on, it’s got a purpose, and it’s a damn good guide. If you are a writer, you should at least see what it’s about, and Nick Stephenson is awesome.

So, that’s basically it. I’d love to hear from you regarding what your favorite books of this past were, or even what I SHOULD HAVE read instead of going down the impossible rabbit hole of true crime. Thanks for reading, and follow me on Twitter for more insights @blakebraddy.